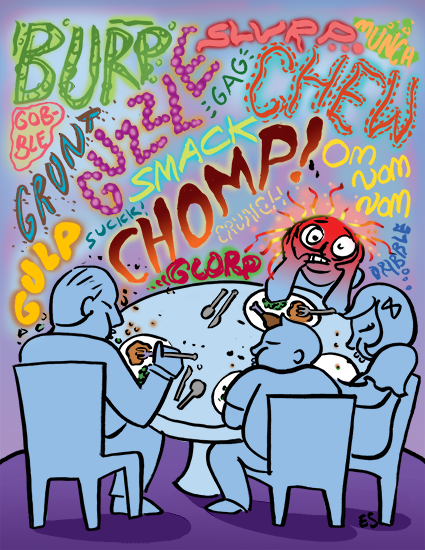 I first learned about Misophonia about a year ago, that’s when I realized I’m not the only person in the world who’s being driven insane by certain sounds. Misophonia literally means “hatred of sounds” and is a brain disorder. But it’s not what you think. It’s not that I’m a negative person who chooses not to like sounds, like when people breathe loudly, pop gum or chew with their mouth open. Those certain sounds, usually repetitive, trigger something in my brain that instantly changes my mood to be very angry and bothered – and I can’t explain why.

I first started noticing that some sounds bother me when I was about 8 years old. It was mostly people around me eating that made me angry; my aunt biting into an apple every night while watching TV, my little cousins chewing with their mouths open, making these specific chomping noises. People slurping soups or tea/coffee, gulping, crunching, sucking on candy, the “Ahh” sound after someone takes a drink of water or an alcoholic shot, the dog drinking etc. Dragging your shoes on the ground while walking, or the flip-flop sound your feet make…  I have two sisters, one a year older and the other a year younger, and they experienced the same effects to all those sounds. That’s when I thought: there are people like me out there, it’s just not everyone can hear those sounds as loud and sharp as we do and it’s easy for others to ignore those sounds.

Growing up with Misophonia was hard. You had to put aside your emotions in order to keep friends and everyday activities seemed more like a chore. Going out to eat with friends, sitting on a bus with strangers who chewed and popped gum, but the hardest was not to hurt anybody’s feelings while trying to point out to them that their sounds make me very angry. Who wants to tell their grandma to try and chew with her mouth closed when she’s already struggling to chew anything in the first place? Ugh.

Staying in relationships, going on dates and trying to find someone whose noises wouldn’t bother me was a struggle as well. My current boyfriend used to chew loudly, and thankfully understood that those noises triggered a bad mood in me so he learned to eat with less noises. I don’t remember the last time I willingly bought a bag of potato chips because I know hearing him eat them later will make me so enraged that it’ll probably make me cry. I still sometimes detect a little crunch or slurp but I try very hard not to show it on my facial expression and “let it go”. My boyfriend’s family all chew and eat very very loud, going to mom’s house always gives me the chills as the whole time I try not to roll my eyes when someone’s slurping or sucking on a chicken wing bone. Gosh it’s so annoying. And it’s so hard to stay and keep polite!

It’s not only food related sounds that make me want to smash my head on the table. My boyfriend works from home and sometimes sits on his computer late nights. Hearing him type on a keyboard, or even the noise of a click of the mouse will not let me sleep peacefully – without sighs and tossing around to “hint” he’s doing something wrong. Even hearing him brushing his teeth. I know! Something that is so normal to others makes me so mad! From what I found out, it’s the because the same sound gets repeated for a certain amount of time it triggers the Misophonia in my brain. It could be water running, the garbage truck backing up outside, the same beat in a song for too long of a time. The waves on the lake hitting the side of the shore/boat. There is no way to tell where’s the limit. One time I lives on the second floor in a building right above the garage door. Hearing it open and close hundreds of times per day made me so cranky EVERY SINGLE MORNING. No happy Ivy during those 3 years of my life.

And no, it’s not just at home. Going to a coffee shop I stay away from the loud typers like they’re the plague. Holding an office job was a very big challenge for me. I worked at a small company once, and my cubicle was about 5ft away from the other 2 ladies who worked there. The keyboard and mouse clicks made me dream about quitting every single work day. It was very hard for me to concentrate on the actual work because the noises around me bothered me so much. Needless to say, I only worked there about 3 months.

And it doesn’t stop there. Any repetitive noise drives me nuts. This includes hearing someone talk on the phone without stopping for a long time, in a monotone voice. So, if you’re in the other room (yes, behind closed doors) and I hear you talk on the phone like you’re a broken record, in the same low, or high pitched, voice, it triggers my sound sensitivity. Same with raspy voices. I wish I just stick my finger in the person’s throat and scratch the ish out of it so it’d stop being so annoying. Whispering.. I can’t stand the sound of people whispering.

Kissing sounds in movies – what others probably find a turn on – drive me insane. To my ears it’s the most annoying sound you could ever make (well, besides tens of other sounds I just named..) Sometimes, even my own kissing sounds. Yes, my own, this doesn’t just apply to other people.

Winter time and public transportation = everyone around you is sniffling. Forgetting to bring my headphones or keep my phone charged so I can play music during those times is definitely going to ruin my morning.

Going to the movies is the hardest for several reasons. First, the popcorn crunch. The person could sit next to me, behind me or in front of me, even several rows away, when I hear that first crunch, the movie experience is ruined for me. Sometimes trying to eat popcorn at the same time the other person is eating it kind of disguises their sound, which is something I learned about 2 years ago. You have got to learn to live with your disorder if there isn’t another way, sort of like “fight or flight”. Second movie theater trigger is “the wrapper sound”. For some this is just something you ignore, for me once someone decides to open what seems to be the most impossible to open candy wrapper on this planet makes me want to punch a wall. Same with the person who insists on shaking the popcorn bag. What The Fuck.

Now, if you don’t go through these Misophonia problems you may think I’m just a snobby brat who complains about everything and points little things out because they’re my pet peeves. Trust me, I am not making all this up, and wish I never “developed” this hatred of most sounds. Ask Kelly Ripa, she admitted to having Misophonia, too! I’ll be blogging about everyday situations that I go through myself and hope some of my readers here start to understand that some people, like myself, would rather sit home alone at dinner than have to listen to another slurp chomp, or sniff.

I’d like to know if anybody wants to share their experiences and things that trigger you. I know there are many people like me out there who get told to “let it go” on daily basis, and I hope we can share solutions for different situations, like earphones on public trans, earplugs to sleep etc.

Thanks for reading and I hope to hear from some of you!